"Fare forth to the West as a musician of the soul and tune the hearts of men to the divine harmony."
Khwaja Abu Hashim Madani
in H.I. Kahn, The Music of Life
1

The Sarangi is the premier bowed instrument of India and Nepal.  The name is derived from the words sau and rangi, translated as hundred-colored, describing its ability to convey a wide range of mood and emotion. There are as many as sixty variations of the instrument. The resonator hole, where the strings are bowed, is covered with a piece of  goatskin, on which rests an elephant-shaped bridge of ivory or bone. It has three gut playing strings and no less than 36 steel sympathetic strings underneath, providing a bright echo.  The three playing strings are stopped with the cuticles of the left hand fingers, while the right hand bows at the bottom. The sarangi is a difficult instrument to play well, requiring a commitment of many years' practice.
The sarangi entered the world of Hindustani music during the 18th and 19th centuries as an accompaniment for songstress courtesans.  It was only in the 20th century  that the sarangi became a noted solo instrument. 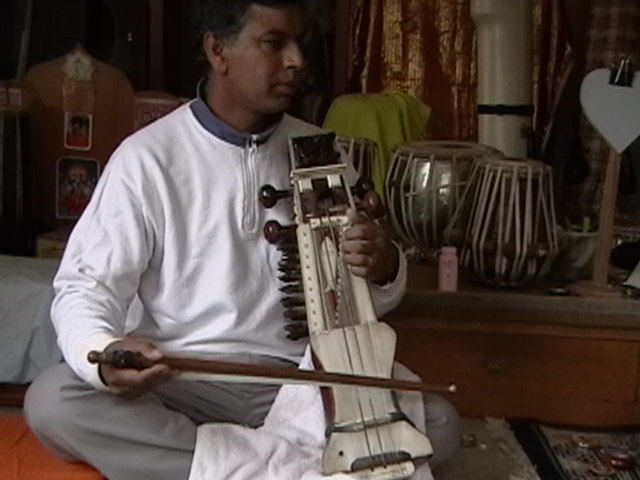